1. If your home is burglarized, thieves can’t take what they can’t find.

2. You get quick access to your and personal items with a 3 digit combination lock.

3. Our safes are constructed of high-quality made in the USA steel.

5. The steel door has a three-point locking system for added security.

6. Our safes are easy to install with full video & reading instructions.

7. Our magnetic item holders let you configure your valuables anyway you want.

Hello my name is Frank Dutra and I am the owner of Hubzone Manufacturing where by we designed as well as manufacture the concealed from view wall safes for Henderson residents.

The idea to develop this wall safe transpired due to being a Law enforcement agent in a major metropolitan city where I observed time and again home burglaries where burglary victims lost their prized possessions. Throughout the United States of America there are approximately 2.5 million robberies per year or one robbery every 13 seconds. In fact, since you started reading this website somebody just became a victim of a robbery.

Based on my personal experiences and records through the department of justice, I designed this specific wallsafe with features to combat the most common residential burglaries.

The simple facts are that 85% of burglaries are executed by males below the age of 25. They are seeking out valuables which they can re-sell very quickly. This includes weapons, money, jewelry, notebooks, cameras, IPODS and other items that carry more than enough market value that they can convert right into money on the very same day that they commit the robbery. Most of these pieces fit nicely into a back pack in which they can easily just walk away with undetected.

If you've previously been a victim of a break-in you will remember that the police officer said to you that they would do every thing possible to get your belongings back and that officer was telling you the truth. The police would like to get your stuff back and put robbers in jail.

The truth of the matter is that... by the time you come home from work and call the police, your valuables have already been sold by the burglar and converted into cash typically for drugs.

I've analyzed surveillance footages to find patterns in burglaries and utilized that information to produce a wall safe which will keep your prized possessions secure from intruders.

Law Enforcement agencies are strapped and investigating home burglaries calls for a lot of resources. As a result, across the united states, just 13% of burglaries are actually cleared. That indicates that there is an 87% chance that you may never see your belongings again unless you take precautions to safeguard your valuables.

When it comes to some victims, the psychological impact of knowing that someone was actually in your house stealing your belongings could be unnerving. Many victims have trouble going to sleep at night as they think that perhaps the individual will be back. Some will wonder if their gun will be used in a criminal activity and somebody will be actually hurt or killed. Even the theft of an IPAD will certainly put you at risk of having your identity stolen which adds insult to injury.

Our WallSafe was designed to keep you from becoming a victim. These are Made in America by Americans. We use American made steel to produce a secure safe for you to keep one step ahead of intruders.

The door is made from 3/16 thick steel so that it can not be twisted or pried open with common burglary tools. The door is secured with a 3 point locking system that is locked with a combination lock.

If your interested in more information about Gun Safe in Henderson Nevada
Give us a Call 775-403-1100 and we'll answer all of your questions. 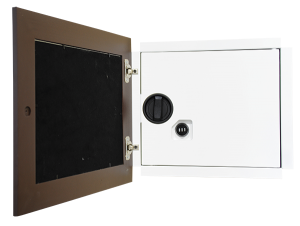 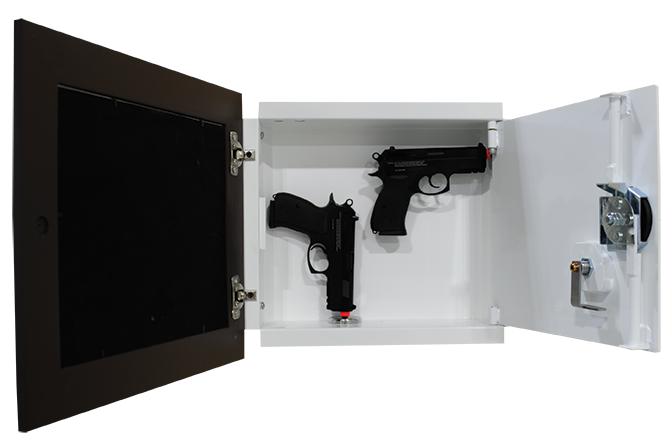 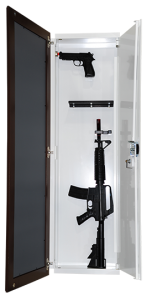